When I am writing this blog I am watching Jamie Oliver's Food Revolution which he filmed in Huntington, West Virginia, USA. Huntington was declared statistically as the unhealthiest city in the America. Being successful in his school canteen food program in UK, Jamie's objective was to introduce changes in people's daily menu so to bring in a healthier life.

In this TV program which he won the 2010 Emmy's Best Reality Show, Jamie openly against the use of "pink slime" in processed food products. "Pink slime" is referred as the processed beef trimmings, such as the attached meat and fat to the skin which was discarded during slaughtering of livestock. So these are the recycled meat, which was supposed to be rubbish to most of us, being used as additive to the beef patty or any other processed meat. This topic was so popular at that time, and still discussing, even the McDonald's have to clarify that they will reduce the use of these rubbish meat!

Brooklyn offers freshly made meat patty burger by their chefs. The burger is very big, a medium size burger like what I had that evening is already bigger than the MegaMac or the Carl's Jr! They do have one biggest burger in the menu, perhaps, the biggest anyone can find in Malaysia -- The Brooklyn Cyclone Burger. This gigantic burger weight just more than 1kg and comes with a "Man v. Food" -style challenge: Finish it within 45min and its FREE!!!

For the list of challengers please visit their FB page. If I am not wrong, only 10% of the challengers managed to finish it! Crazy bah... 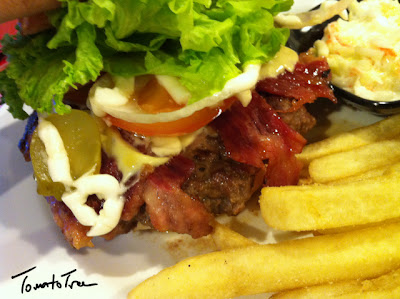 View Lintas Plaza in a larger map
Posted by Frankie H at 10:09